TED is a nonprofit foundation devoted to spreading ideas, usually in the form of short, powerful talks (18 minutes or less). TED began in 1984 as a conference where Technology, Entertainment, and Design converged, and today covers almost all topics — from science to business to global issues — in more than 100 languages. Meanwhile, independently run TEDx events help share ideas in communities around the world.​

Are you tired of watching the news, and of only hearing about tragedies, murder, wars, and general mayhem?  Then you'll find TED to be a breath of fresh air.  Every day, you can listen to a short talk (10-20 minutes) from someone who is making a difference in the world.  You'll find many to be inspiring.

Since 1984 its scope has become ever broader. Along with two annual conferences -- the TED Conference in Long Beach and Palm Springs each spring, and the TEDGlobal conference in Edinburgh UK each summer -- TED includes the award-winning TEDTalks video site, the Open Translation Project and TED Conversations, the inspiring TED Fellows and TEDx programs, and the annual TED Prize. Learn more here.

Below is an example of one inspiring TED talk.  In a moving and madly viral video, composer Eric Whitacre led a virtual choir of singers from around the world. He talks through the creative challenges of making music powered by YouTube, and unveils the first 2 minutes of his work, "Sleep," with a video choir of 2,052.

TED-Ed’s commitment to creating lessons worth sharing is an extension of TED’s mission of spreading great ideas. Within the growing TED-Ed video library, you will find carefully curated educational videos, many of which represent collaborations between talented educators and animators nominated through the TED-Ed platform. This platform also allows users to take any useful educational video, not just TED's, and easily create a customized lesson around the video. Users can distribute the lessons, publicly or privately, and track their impact on the world, a class, or an individual student.

Daily coverage of the world of ideas from the people who bring you TED Talks.​ 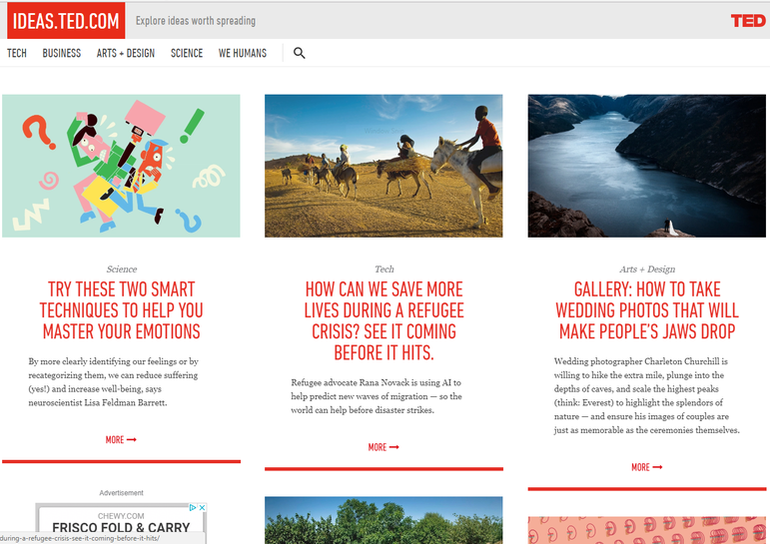 The success of TED Talks has demonstrated that millions of people around the world are hungry to absorb new ideas. Many of the talks create a desire to go deeper -- but not everyone has the time to read an entire book on a subject. TED Books fill that gap. With more demands than ever on people's time, we think many will welcome the chance to absorb a TED Book on a single short plane flight or on a day's commute.

While a traditional book is at least 60,000 words, TED Books, at fewer than 20,000, allow a writer to flesh out an idea in a satisfying way -- without requiring a week of reading time. We created this imprint because new ebook technologies like Kindle and iPad have changed the rules of the game. Just as iTunes allowed people to build new listening habits around individual music tracks instead of albums, so the new reading technologies allow instant distribution of books of any length -- facilitating new, more focused reading habits.

You can download and read TED books on your Kindle, your NOOK, or in iBooks on your iOS device (iPad, iPhone, iPod Touch).
Page last updated June 22, 2018